Why we need to dream

Sleep is absolutely essential. After only a few days of being continuously awake, people begin to suffer from increasingly severe psychological symptoms, before ultimately, their body completely shuts down. We need the down time that sleep provides, to perform key regulation and regeneration activities in order to keep the body functioning normally.

Dreaming appears to be a necessary part of this requirement for sleep. Disrupting only the REM phase of sleep where dreaming is most frequent, leads to the onset of the same biological and psychological issues, as preventing sleep entirely. However the reasons as to why we should have such a need for dreams are less clear.

There are three general classes of theory put forward as an explanation; psychodynamic theories, like those of Jung or Freud, which focus on the processing of unconscious thoughts, information processing based theories such as Calvin Hall's cognitive theory or Evan's computer theory, and finally biological-mechanical theories which place the importance on biological processes in the ordering of thoughts and memory.

In recent years, as the use of EEG and MRI machines have made their way into dream research, it is the biological-mechanical approach which has been gaining the most support. These kind of neuroimaging studies have repeatedly shown that areas of the brain which are active during the learning of a new task, are the same as those which are active during subsequent phases of dreaming. This lends support to the idea that dreaming is perhaps involved in consolidating this new information.1 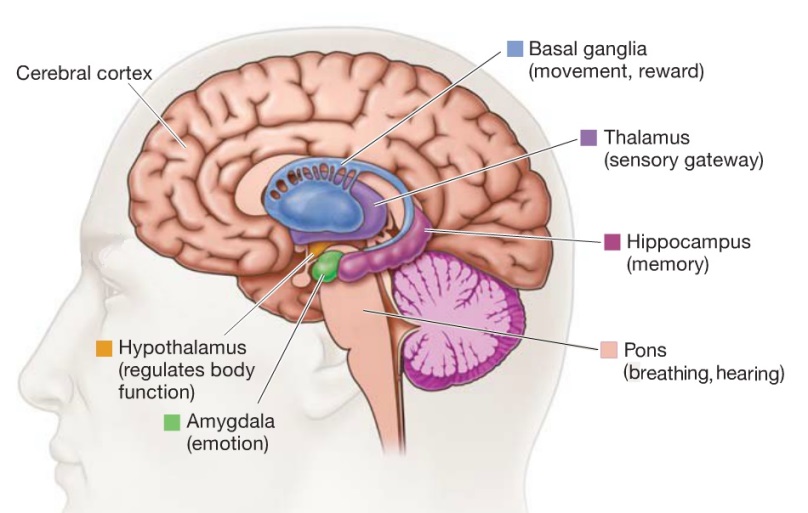 The cortex is the most recent part of our brain to evolve, and is generally understood to be responsible for our higher functions. It is associated with the integration of information provided by both our sensory organs, and other regions of the brain into a single coherent picture. The cortex has been shown to be highly active during REM sleep, despite the fact that most external stimulation is cut off.

The activation-synthesis model of dreaming put forward by Allan Hobson and Robert McCarley of Harvard University, proposes that the basically random source of electronic information generated by another more primitive region of the brain, the Pons, causes a knock on effect, activating specific areas within the cortex, eliciting well-known images. This activity in the Pons, which is essential for managing non-conscious biological processes (such as breathing and hearing), is indistinguishable from signals which would normally have been relayed from the eyes/ears. The cortex then tries to interpret and make sense of (to synthesise) this randomness, processing the activity as if it were real events, generating dreams as a result. This suggests why dreams can be so bizarre, since the specific activity in the cortex is triggered by the semi-random activity of the pons.

It is the interaction between our cortex and a further area of the brain; the limbic system, which is responsible for our experience of emotions and sensations. Within the limbic system; the hippocampus is active when we dream, suggesting that dreams draw upon our store of memories. The amygdala and anterior cingulate, areas responsible for emotion are also active, indicating a reason why dreams can be highly emotional.

Michio Kaku is his book ‘The Future of the Mind’, suggests that more important than the areas of the brain which are active during dreaming and those which that are shut down, including the dorsolateral prefrontal cortex (which is the command centre of the brain), the orbitofrontal cortex (which can act like a censor or fact-checker), and the temporoparietal region (which processes sensory motor signals and spatial awareness).

This idea is supported by neuroimaging studies, which show reduced activation in the prefrontal cortex during REM sleep. The theory is that reduced activation of the dorsolateral prefrontal cortex in particular accounts for the reduction in many of our higher cognition abilities during dreaming. With this region offline, we experience the typical features of dreaming such as; illogical thought, discontinuities in the dream experiences, and impaired memory.2

Are the brains of Lucid Dreamers different?

A study published in January 2015 in the Journal of Neuroscience, set out to determine if people with high and low dream lucidity had different levels of ability to monitor and report their own thoughts and mental states.

One outcome of the research, was in showing that the brains of people with high and low levels of dream lucidity were different. Subjects with high lucidity had greater grey matter volume in the frontopolar cortex, compared to those with low lucidity. This brain region also showed higher activity during the thought monitoring exercise in both groups of subjects, with stronger increases in the high-lucidity group. This strongly suggests that lucid dreaming and metacognition (monitoring your own thoughts) share some underlying mechanisms.3

In another study, Ursula Voss and her colleagues at Frankfurt University used electroencephalograph machines (EEG) to create profiles of the brainwaves for people having both lucid and non-lucid dreams. She found that lucid dreaming had a significantly different EEG profile than non-lucid dreaming.

Regular waking consciousness typically shows a 40Hz frequency brainwave, known as Gamma waves, as dominant in the frontal regions of the brain, and this drops to around 20Hz (Beta waves) in a typical, non-lucid, dreaming state. Voss found that lucid dreams are correlated with maintaining a 40Hz brainwave in these frontal regions, specifically, the dorsolateral prefrontal cortex (DLPfC), although at a reduced level when compared to full waking consciousness. She also found there was greater coherence between the brainwaves produced in the frontal and occipital lobes for lucid compared with non-lucid dreams.4

This was backed up by work carried out by a group of German researchers led by Michael Czisch. Czisch and his team used fMRI machines to study the brain activity of lucid and non-lucid dreamers, and also found significant differences. These studies confirmed Voss findings that lucid dreaming shows increased activation of more than just frontal areas of the brain, discovering increased activity in temporal, parietal and occipital brain regions.5

What does this tell us about the biology of lucid dreaming

Traditionally the states of consciousness of being awake and being asleep were cleanly divided, with distinct brain states associated with each. The discovery of the REM dream state in 1953, complicated this picture, as the brain showed increased levels of activity, somewhere between deep non-dreaming sleep and waking consciousness.6 Brain imaging studies are now indicating lucid dreaming adds another layer to this picture, as a hybrid state between fully awake and REM sleep.

The EEG profiling and MRI imaging studies carried out by Voss, Czisch and their colleagues, are really useful in showing there are concrete physical differences between the brain activity associated with lucid and non-lucid dreaming. However because of the number of brain regions they found differences in, their results can also be difficult to interpret. Their results suggest there isn’t a single brain area that is wholly responsible for lucidity, but rather as with other complex neural and psychological processes, networks formed between multiple brain regions, sharing multiple functions are responsible. 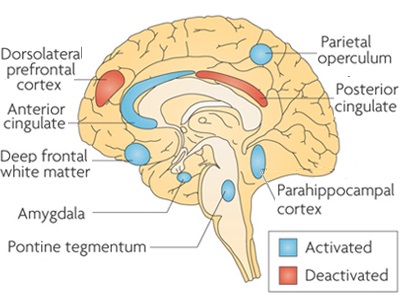 The regions of the brain which show increased activity in lucid dreaming, are generally located in the frontal lobes of the cortex. The frontal lobes have been associated with self-awareness, will power and working memory. These are the structures which allow our brains to monitor and have some control over their own activity. The experience we get of activity in these areas is a sense of being introspective, of thinking about our own thoughts.

The neuroscientist, Allan Hobson, has theorized that, in that moment where a dreamer first recognizes that they are dreaming, this stimulates activity within the dorsolateral prefrontal cortex, a critical component of self-awareness. The greater the level of activity within this region is, the more aware the person is of their dreaming state.

It is therefore likely that lucid dreaming is an emergent phenomenon. It is not something that we specifically evolved since it does not appear to serve a specific adaptive function. Rather lucidity is something that occasionally spontaneously emerges, due to random activity, in a set of brain functions responsible for self-awareness and introspection.

However as with many states of consciousness and psychological processes, it can also be trained and improved, taking advantage of a positive feedback loop. Practicing the techniques to induce lucid dreaming, causes structural changes within the brain, specifically within the fronto-polar cortex, making subsequent lucid experiences more likely and more frequent.

1. Kaku, M. (2014) ‘The Future of the Mind: The Scientific Quest to Understand, Enhance, and Empower the Mind’